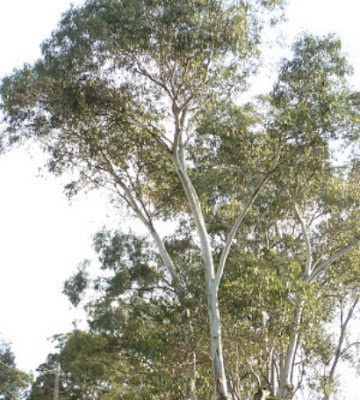 A few blocks away from my house, near a small group of shops, a tall, majestic gum tree grows. 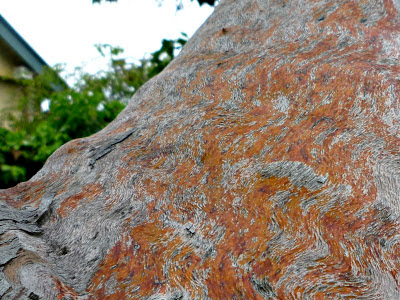 Its trunk is decorated by an attractive and intriguing wavy pattern. I'm wondering what caused the pattern in the bark?


Found along the eastern coast of Australia, are eucalypts  known as Scribbly Gums. They were first described by European botanists in the 1700s, and since then have fascinated generations of Australians and visitors.

Until recently the scientific understanding of the scribbles was blurry. In the 1930s, entomologists discovered that the larvae of a very small moth caused the scribbles, It was identified as a new species and named Ogmograptis scribula - the scribbly gum moth.

In 1999 an observant student compared the scribbles on different species of eucalypts, found they were different and suggested that more than one species of moth might be responsible.

In 2005 two species of moth were collected from a tree with two different scribble tracks. This provided proof that more than one species was involved, and helped scientists to learn about the life cycle of the moths.

But it wasn't until November 2012 that a breakthrough was made by a 'retired' moth expert, Dr Marianne Horak, working at the CSIRO National Insect Collection in an honorary capacity. Dr Horak discovered that there were at least 12 species of moths that made scribbles in bark, and described 11 new species of moth.

Scribbles appear on the trunks of about 20 species of eucalypt trees. They represent a unique plant-animal relationship. The scribbly gum moth larvae tunnel through the bark of the eucalypt in loops. In response to this the tree produces scar tissue cells that are very nutritious for the caterpillars, who turn around and eat their way back the way they came.  When mature, the caterpillar leaves the bark to spin a cocoon at the base of the tree. In time the bark drops off and the scribbles are visible.

There are lots of discoveries to be made in moth research.  Out of about 22 thousand species of moths only around half of these have been identified so far! 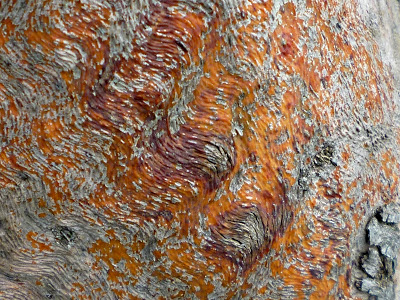 I'm not sure if this tree is a scribbly gum. As I said, the pattern's more wave-like than scribbly. Maybe the moth responsible is one of the 11,000 not yet identified , and / or maybe it is a new Eucalypt species: Wavy Gum!