insects and spiders in my garden

The Arthropoda phylum includes spiders, crustaceans, centipedes, millipedes and insects.  These characters all inhabit the garden, up till now barely noticed. Now I am making an effort to observe, identify and photograph these creatures.  Very big learning curve ...

This Diamondback Moth was on the wall of the bedroom. I thought it was just a piece of fluff until I looked closer. It is an agricultural pest, feeding on plants from Brassicaceae family (cabbage, cauliflower, brussels sprouts, etc) and ornamental flowers such as wallflower. I think it was looking for the kitchen to search for green vegetables, but got lost and ended up in the bedroom.

The Common Garden Katydid is found on the foliage of different plants. they eat leaves and flowers. they are usually well camouflaged, although in the case of this individual I think he would be safter on  a green leaf. Males attract females by rubbing their forewings together to produce a sound.

I have been noticing this little beetle for some time, and thought it was a different coloured ladybird. But no, it's a Gum Leaf beetle that eats leaves and lays its eggs on leaves or leaf stem. The larvae feed on the leaves, then drop to the ground to pupate in the soil.

This small beetle feeds on lilies and cycads. I found it sitting on the leaves of the Rainbow Fern.

This fly is a lovely metallic blue colour. It feeds on nectar. Like most species of blowflies it lays its eggs on carrion or dung. Plenty of possum poo for it to thrive in my garden.

Leaf-curling spiders protect themselves by hiding inside a curled leaf held together with silk. They build a web around their retreat and feed on insects caught in the web. In this case the spider will be disappointed because what has been caught in the web is possum poo.

The Garden Mantis is also known as the Green Mantid. Its habitat is among garden foliage, where it catches and eats small insects. They lay eggs in a foamy egg case called an ootheca, that has a woody appearance and is attached to a leaf, stem, wall or fence. They hatch out as small versions of the adult.

This spider builds its web between the branches of low trees and shrubs. It then sits and waits for tasty insects to get caught in the web.
These beetles are scarab beetles that are most active in the warm summer months. They feed on eucalypt leaves. They lay their eggs in the soil, and develop for about a year feeding on organic matter and plant roots. The larvae pupate in late winter emerging as adults a few weeks later.


Psyllids are sap sucking bugs. When disturbed they jump or fly away. They are very host specific, feeding on plants from one or a few related families. In my garden they seem to like lots of plants. 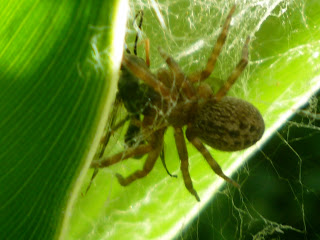 The Black House Spider is found on tree trunks, inside curled up leaves and around the house under the eaves, on window ledges and similar places. It eats insects such as moths, flies and beetles. The female never leaves her web unless she is forced to. When ready to mate males search for females in their webs, and pluck the web to attract her attention. This photo looks like a male visiting a female in her web.