the call of the wild 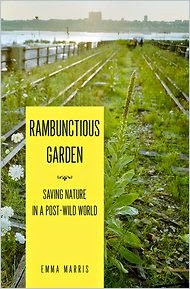 Two writers write about wild nature. Griffiths sees wildness in special places lightly touched by people, places where shamans live, where people still exist by hunting and gathering. Everywhere else is wasteland. Marris see nature nearly everywhere -  in people's gardens, in parks, farms, strips of land next to fast food places, roundabouts. Even where there's concrete, after a while green shoots creep through the cracks. It's not pristine, but it's nature, and can be thought about, and changed by us, for the better. Marris is looking at the now. Griffiths is yearning for a lost past.

Emma Marris' Rambunctious Garden: Shaping Nature in a Post - Wild World challenges core taken for granted facts about ecology. It's like changing the lens of your glasses, or blinking and suddenly seeing a picture differently.  Not all exotic plants and animals become terrible invasive species. Many thrive and adapt and help to increase biodiversity. If the choice is to let a species become extinct because of climate change, or moving it to a cooler place, maybe it's worth intervening.

Rather than look at the actual species that are becoming extinct, and trying to restore them to an environment that is changing, this ecological model looks at processes. In one area there were grazers, leaf nibblers and wallowers. Then they migrated or became extinct. For practical reasons it may not be possible to reinstate the particular species that lived there, but it may be possible to send proxy species that perform the same functions  - an idea called radical rewilding.

There is a paradox here. What appear to be wild places tend to be carefully managed in order to stay 'wild', whereas truly wild places, teeming with exotic species, may not be valued or even noticed. These places can be managed too, an idea called novel ecosystems.

In contrast to these practical future-oriented ideas is the seductive, powerful poetic writing of Jay Griffiths in Wild: An Elemental Journey. Griffiths travelled the world to experience the joy, fear, transcendence and beauty of wildness and wilderness. The lives of hunters and gatherers are painted as a perfect balance of nature until consumer culture catches up with them and throws them off their lands.

Griffiths feels contempt for the contemporary world:  A rage against the out of town shopping centre, placed on the last little chinks of commons, the wild places on the edge of towns ... the commons up for sale - another enclosure... making the Amazon arid and the Arctic an overheated suburbia. It's not that I don't agree with this. It's just that it's presented in black and white. This all or nothing approach is fanatical and doesn't provide us with hope or strategies to deal with hard environmental issues.

Both Maris and Griffiths write about corridors. For Maris corridors are an important way of linking wild places so species can move around. She gives an example of such a corridor next to a freeway in Holland ... humans and wildlife, all busily going somewhere ...   For Griffiths corridors are soul destroying: ... corridors of convention ... supermarket aisles ... pavements of nonevents, or those that took no risks... pavements that trod past semi-detached houses, semi-the-same, semi-skimmed milk semi-tasted and always lukewarm.

Maris is practical, pragmatic, tolerant, though no less passionate than Griffiths. There is no one best goal... Here, land for soulful contemplation, plus water filtration. There, land for the tiger and for ten endangered plant species. Over there, a mixed bag of refuge for island species that have winked out on their home atolls. And there, farms with wide boundaries left to go wild and highway medians covered in flowers.

Check out  Montreal: Concrete Gardens for a great example of combining nature, creativity and concrete. It can be done.
Email Post
Labels: books change gardening in suburbia urban environment wildlife